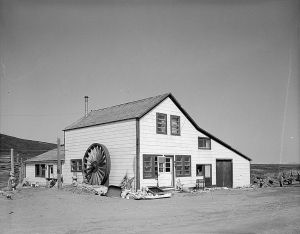 Jutting into Norton Sound 15 miles east of Nome lies the headland Cape Nome, which extends inland for about four miles and rises 675 feet from sea level. In 1901, British Admiral and hydrographer Sir William Wharton wrote: “The name Cape Nome, which is off the entrance to Norton bay, first appears on our charts from an original of Kellett in 1849. I suppose the town gets its name from the same source, but what that is we have nothing to show.”

When large gold deposits were discovered in 1898 the Cape Nome Mining District was formed and the Nome Gold Rush was on. Hopeful miners flocked to the area in the spring of 1899, producing the largest gold rush in Alaska, and the third largest in North America, after the 1849 California Gold Rush and the stampede to the Klondike in 1898. Over a million dollars in gold was taken from the beaches of Nome in 1899, and by 1900 a roadhouse had been built at Cape Nome, constructed with logs hauled by horses from the wooded Council area, some 80 miles to the east. 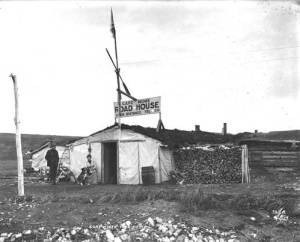 Described as “sturdy, squat and convenient,” the first roadhouse was soon added onto, enlarged and reconfigured to become a building which could only be described as incongruous, resembling a New England-style saltbox, which took its name from its resemblance to a wooden lidded box in which salt was once kept. The defining characteristics of a saltbox are two stories in front and a single story behind, resulting in a long sloping roofline. They were often created when a single-story lean-to was added to an existing building.

The Cape Nome Roadhouse is listed on the National Register of Historic Places, and documentation from 1976 notes: “In side profile this is a modified New England “salt box” design, except for the functional practicalities. For here, unlike a true salt box, the front and side elevation features (doors and prominent windows) are reversed. It is doubtful if the design was premeditated. The largest expanse of roof section, sloping from two stories to one, was probably a concession to heavy roof snow, drifting snow and prevailing winds rather than to any aesthetic consideration. The appearance is uncommon for Arctic Alaska at any time––but was even more so in the early part of this century. As an Alaska roadhouse, Cape Nome is definitely unique, atypical.”

In his Trail Notes for the Iditarod Trail Sled Dog Race, Don Bowers wrote sobering words about the Cape Nome area: “This can be one of the most dangerous stretches on the race when the wind blows or a storm hits. Mushers have nearly died within what would normally be a few hours’ easy running to Nome. In reasonable weather, this is a pleasant five- to eight-hour run; in the worst conditions, it can be impassable.”

The National Register of Historic Places survey describes the interior of the roadhouse: “Initially the interior was barracks-like; to provide a maximum of sleeping accommodations in two large, unpartitioned rooms which ultilized most of the space; plus a smaller dining room and kitchen. Eventually more partitioning was added. Other slight modifications were made when the use changed to merchandising rather than provision of room and board; and more recently as essentially a family residence.”

For many years the Cape Nome Roadhouse was an important stopover for travelers on the Nome-to-Fairbanks Trail and later the Iditarod Trail. With the construction of the Nome-Council Wagon Road and the coming of commercial aviation the roadhouse was no longer in demand for meals and lodging, and by 1918 it had become an orphanage for the Nome Methodist Church. It was utilized as an FAA communications station during WWII and into the 1950’s, and at the time of the National Register of Historic Places survey it was a live-in grocery store.

Today the Cape Nome Roadhouse is owned by the Hahn family of Nome. There are some lovely color photos, in which it is referred to as the Old Point Nome Roadhouse, at the online ship log of the sailing yacht Tyhina, including photos of the view to sea and the fireplace inside the roadhouse.

In 1900 a report by a US Geological Survey party which included Alfred H. Brooks and Walter C. Mendenhall featured a large topographic map of the Seward Peninsula; shown here is the bottom half, which includes the Cape Nome region.

• A dozen excellent photos of the roadhouse, July, 1980 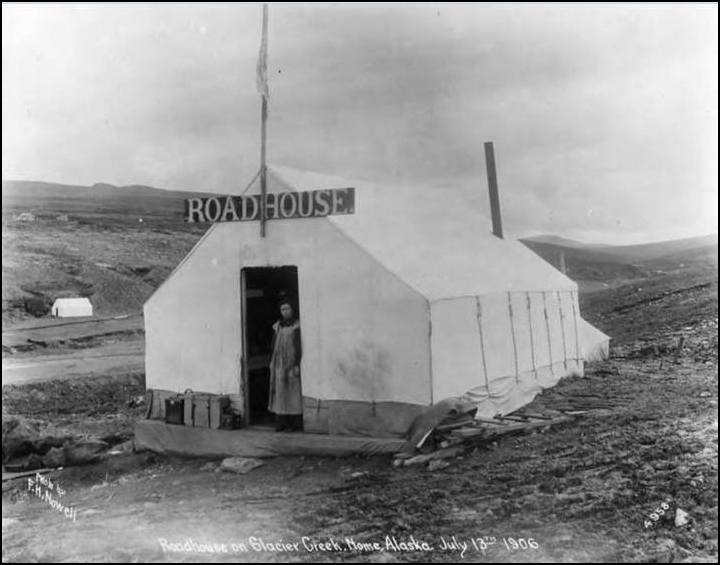